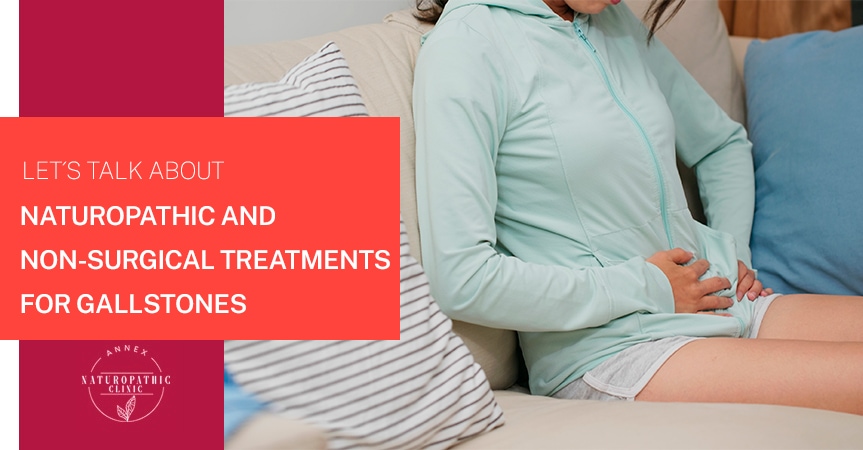 Over 10% of the population is estimated to suffer from gallstone disease at some time. True to their name, gallstones are hard, stone-like deposits that form inside the gallbladder. They can cause pain and digestive problems, leading to a decrease in a patient’s life quality.

Non-surgical treatment for gallstones or a naturopathic approach can be more suited when the disease is diagnosed early on and patients don’t present major symptoms.

In this article, we will discuss the causes and symptoms of this disease, and explore the possible treatments which may allow a patient to live with gallstones without surgery. Read on to find out more. 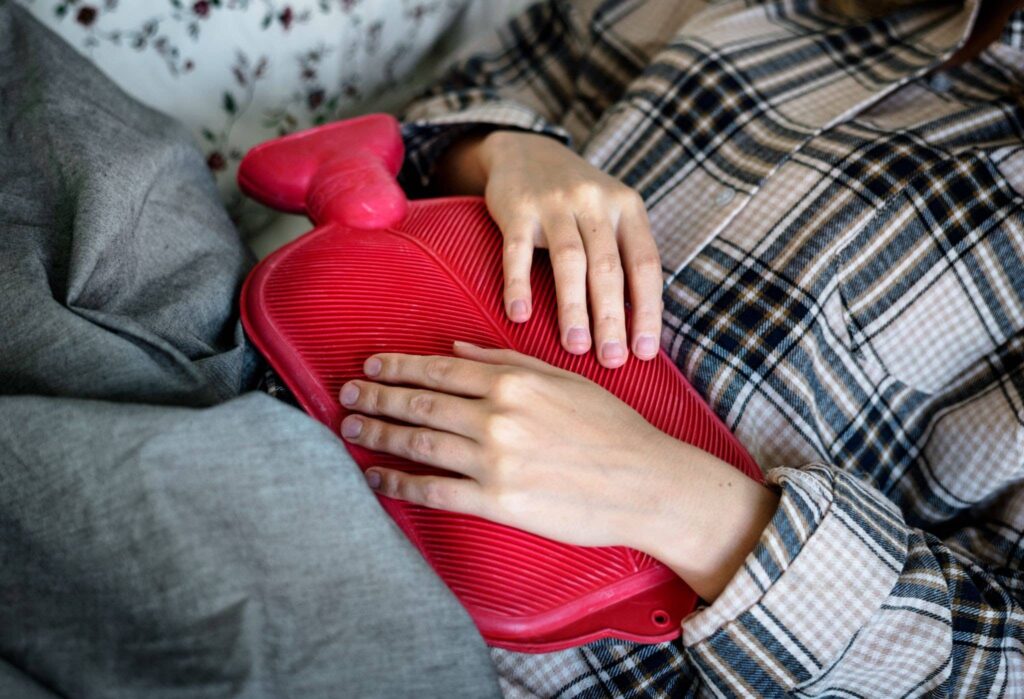 Gallstone disease or cholelithiasis originates in the gallbladder, a small organ located on the right side of the abdomen, beneath the liver. The gallbladder stores and concentrates bile, a digestive fluid produced by the liver and released in the small intestine during the process of digestion.

Gallstones are hard, pebble-like deposits made out of cholesterol or bile pigments that precipitate when there is a local chemical imbalance.

Symptoms may appear when stones block the cystic duct (the tube that carries bile from the liver to the gallbladder) or the bile ducts (the tubes that carry bile to the small intestine). Large or abrasive stones can also cause local inflammation and even tear the gallbladder wall.

What are the Causes of Gallstones?

In normal circumstances, bile dissolves cholesterol and releases it into the small intestine. If the liver produces a large amount of cholesterol, the bile cannot dissolve the excess quantity, which will form crystals. These cholesterol crystals can adhere to mucus, dead cells, and other particles in the area to form gallstones. A similar thing can happen when the liver produces too much bilirubin pigment.

A sluggish bladder may also lead to the formation of gallstones. If the gallbladder doesn’t empty effectively, bile becomes very concentrated and may form a ‘sludge’. This concentrated digestive fluid can precipitate and form gallstones.

Ultrasound is one of the best techniques used to diagnose this disease. In fact, most gallstone cases are incidental findings during ultrasound investigations for other reasons, unrelated to the gallbladder.

In symptomatic cases, the physical examination and medical history can be a helpful guide for doctors. This would probably be accompanied by blood and urine examinations, as well as ultrasonography and abdominal X-ray.

What are the Symptoms of Gallstones? 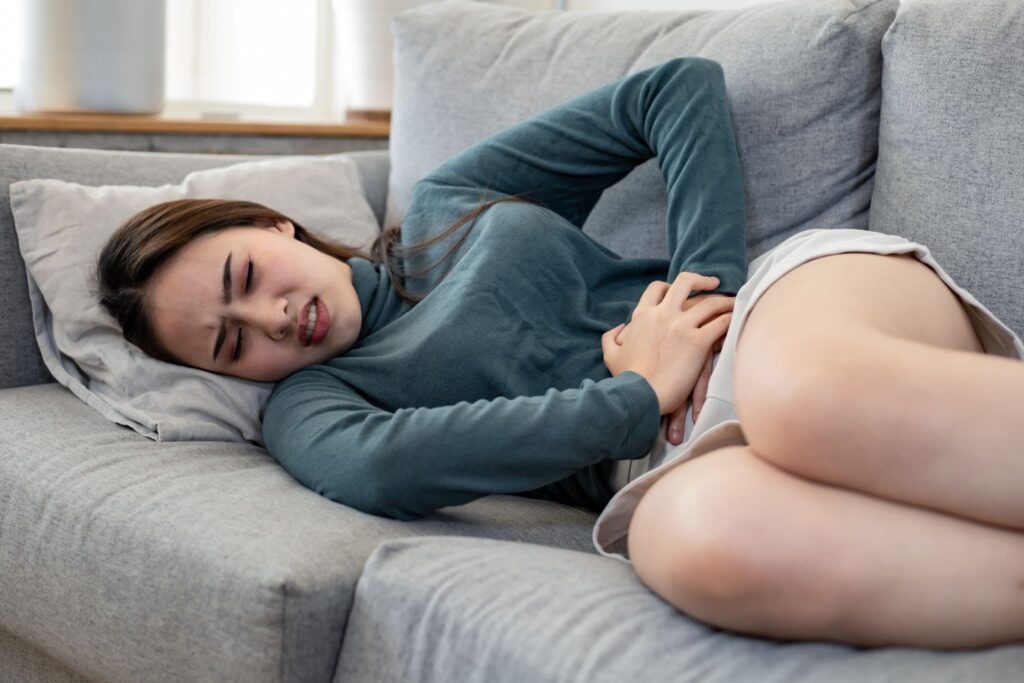 Approximately 80% of people with gallstones do not experience any kind of symptoms or develop complications for a long time. However, some of these asymptomatic patients may start to develop symptoms when the gallstones accumulate in a particular area or block the cystic duct.

Symptomatic cases are associated with episodic, severe pain in the upper abdomen. Biliary pain may radiate through the back and is sometimes accompanied by vomiting and nausea. Studies show that over 20% of patients may still present biliary pain even after the surgical removal of the gallbladder.

Pain is usually a consequence of the stones blocking the bile ducts or cystic ducts. If the ducts become permanently obstructed, other symptoms such as fever and jaundice might be present.

Natural treatments can be adjunctive and alternative to invasive medical interventions. Naturopathic Doctors help patients understand what factors lead to this development and how to manage it in order to prevent it from impacting other areas of health.

Natural treatments can also be helpful in preventing gallstone disease. It’s important to know that before starting any kind of treatment, you should consult a medical professional such as a Naturopathic Doctor.

Studies have also shown that caffeinated coffee might have a role in preventing gallstone development. This protective effect seems to be related to the stimulating effect of coffee on bile flow.

The gallbladder flush or gallbladder cleanse is one of the most popular remedies, but is unfortunately not backed by scientific data. It recommends consuming a mixture of apple juice, Epsom salt (labeled for internal use), and olive oil.

The cleanse is meant to act as a laxative and encourage the emptying of the gallbladder. Results for this remedy are varied and controversial and may be unsafe for people with underlying diseases, such as diabetes. Make sure to consult a medical specialist before starting any type of cleanse.

This remedy is often recommended as a treatment for gallstones. Although there are no actual studies to confirm the effect of apple cider vinegar on gallstones, some studies do praise other effects, such as lowering blood sugar.

Apple cider vinegar may also lower cholesterol levels, which might be useful in preventing the formation of gallstones. However, this kind of treatment can cause problems for people who have other disorders, such as diabetes, gastritis, and hypoglycemia.

The active ingredient in this plant is called silymarin and has been used for a long time for the treatment of liver disease. There is scientific data on the activity of silymarin on gallbladder stones, and studies show that milk thistle has a protective effect on the liver and may prevent gallstones by promoting liver function and lowering cholesterol levels.

This well-known plant has many beneficial effects on the body. Studies show that it has a stimulating effect on the liver and gallbladder. It may help prevent gallbladder stones by stimulating the release of bile from the gallbladder.

Artichoke can be consumed in all forms, but taking artichoke extract supplements should only be done after consulting a medical specialist.

This form of alternative medicine uses needles that are inserted in certain points of the body in order to stimulate the central nervous system.

Ursodiol and Chenodiol are bile acids that can be used to prevent the formation of gallstones, or for the treatment of gallstone disease. They work by changing the structure of crystalized cholesterol from the surface of the gallstone.

In one study, patients with rapid weight loss after a gastric bypass intervention were less likely to develop gallstones after they were given ursodiol. Unfortunately, this kind of treatment is not efficient for bilirubin gallstones.

This shockwave is not absorbed by the body’s soft tissues, but it shatters the gallstones in its path. This method has proven effective for gallstones with a diameter of up to 3 cm.

This treatment method is generally followed by oral administration of medication meant to dissolve the fragmented stone and help its removal from the gallbladder.

MTBE or methyl tert-butyl ether is a flammable liquid used as a gasoline additive. Its medical use is related to the chemical’s ability to dissolve gallstones. Its use is sometimes recommended if surgical or endoscopic interventions are not possible.

It is also efficient in dissolving bile pigment gallstones, but it is unfortunately associated with some side effects and a significant percentage of gallstone recurrence.

Draining The Gallbladder With Endoscopic Techniques

Endoscopic transpapillary gallbladder drainage is an alternative non-surgical treatment for patients with severe symptoms of gallbladder disease. This type of procedure uses a stent to enlarge the gallbladder opening to allow drainage and the removal of gallstones.

This method has many advantages, like being cost-efficient and eliminating the risk of pancreatitis associated with ERCP (endoscopic retrograde cholangiopancreatography). It also has a success rate of up to 95%. 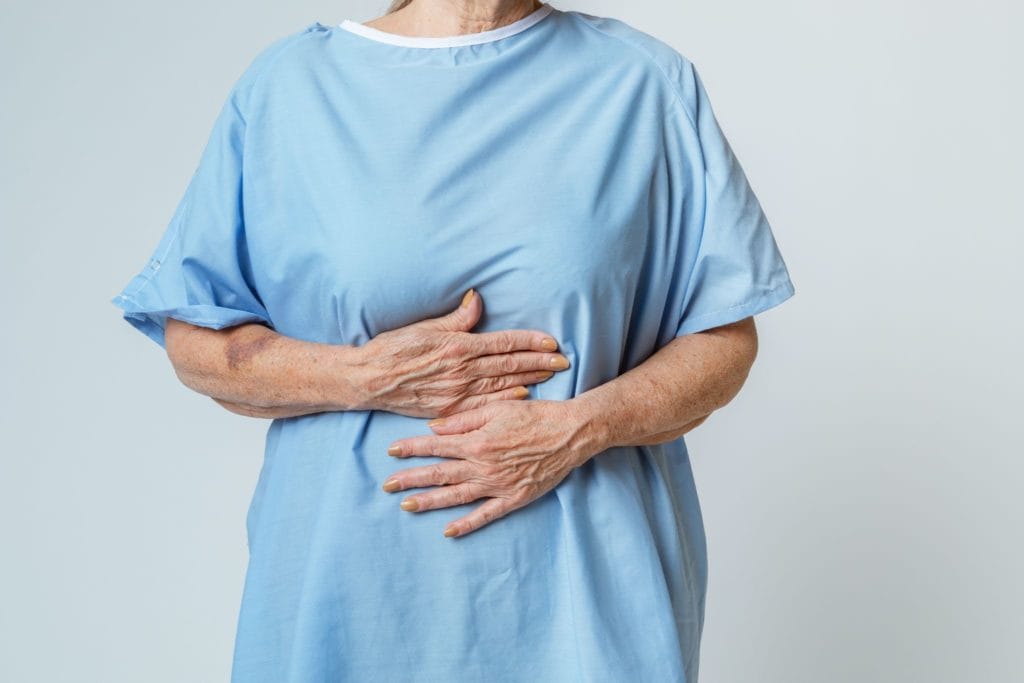 This method is an alternative to the surgical removal of the gallbladder and involves placing a tube in the gallbladder lumen to facilitate drainage and provide a potential route for stone removal or dissolution.

The term percutaneous means through the skin, and cholecystostomy means the creation of an opening in the gallbladder. This method of treatment requires only local anesthesia and uses ultrasound guidance for the puncturing and insertion of the tube. The tube is maintained in place for the duration of the treatment.

This method is generally recommended for complicated cases associated with local inflammation (cholecystitis). It uses endoscopic ultrasound for the guiding and insertion of a tube through the gallbladder wall that allows the drainage of bile. Instead of puncturing the skin, the surgeon will insert the tube through the stomach or the small intestine.

The efficiency and safety of this method are comparable to the percutaneous cholecystostomy method, and results seem to vary with the quality and types of materials used in the procedure.

Gallstones don’t cause any symptoms in most cases, so living with this disease is a real possibility. In fact, most doctors don’t recommend any invasive treatment if their patients don’t show signs of discomfort.

With some lifestyle changes and proper management, it may be possible to live the rest of your life without your gallstones causing any problems or complications.

Would you like to treat or prevent gallstones through nutritional support? We can help!

Can you live with gallstones without surgery?

Yes, most people are unaware of their gallstones and they live most of their lives without any symptoms. If your gallstones don’t cause discomfort, pain, or other symptoms, surgery shouldn’t even be one of the treatment options.

What happens if you leave gallstones untreated?

It varies from person to person. Some patients can live their whole lives without symptoms or without requiring any kind of treatment, and other patients start to develop symptoms if the stones cause local obstructions or if the gallbladder lining is hurt by abrasive stones.

What is the most common treatment for gallstones?

The most common treatment for gallstones is cholecystectomy, the surgical removal of the gallbladder. This kind of radical treatment only applies to patients who have symptoms such as pain, digestive problems, or jaundice.